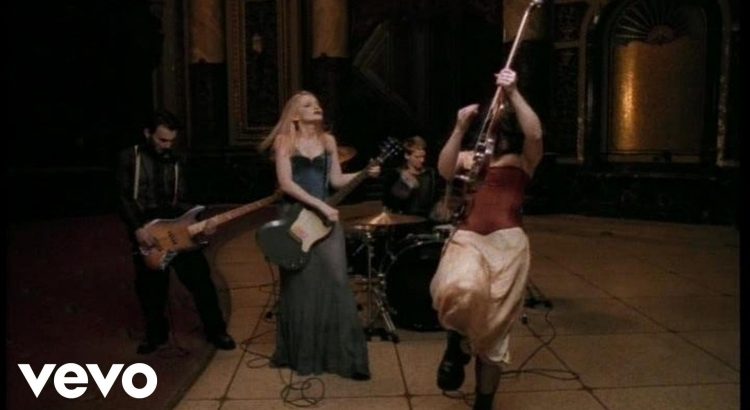 They did warn you about the Seether.

Three years after coming out of nowhere with a powerful series of rock hooks on their debut album American Thighs, the quartet fronted by Louise Post and Nina Gordon roared back with the 1997 sequel Eight Arms to Hold You. “Sequel” was literal in this case — lead single Volcano Girls featured a callback to their breakthrough single Seether.

Both of these albums are underrated classics, entertaining relics of a time in which a handful of rock bands actually had a sense of melody. They were underrated because there was still an element of the rock press that couldn’t get over the notion of attractive women playing electric guitars. A couple of decades had gone by since Heart had supposedly smashed the stereotypes that women don’t play rock, but Heart had spent the 80s doing schlock-rock ballads for MTV consumption, and critics were determined only to take Liz Phair seriously at her most explicit.

And yes, Post and Gordon attracted a considerable amount of gossip. Gordon was dating Blake Smith from a band called Fig Dish. (As things started falling apart, she dated Stacy Jones, the drummer who replaced her brother, Jim Shapiro, in Veruca Salt.) Post, like many celebrities and snowboarders of the time, dated Dave Grohl.

While we can’t blame Veruca Salt for Taylor Swift’s career of angry breakup songs, it’s pretty clear that one should not do wrong by Post or Gordon. But when it comes to whoever is the target of Shutterbug, their loss is clearly our gain. This is one ferocious kick in the teeth with haunting melodic hooks. (And an interesting counterpart to the Gordon-penned Loneliness Is Worse, the soaring power ballad asking the age-old question, “Don’t you wanna be happy with me?”)

At least, we think this is a breakup song. The last verse certainly sounds like it. The first verse, according to two unverified accounts on the interwebs, refers to PJ Harvey and is probably not meant to be insulting. The journalism veteran in me hates to pass along unverified info, but we have to consider the prospect that these are three loosely related snapshots rather than one prolonged nasty breakup.

But we’re going to proceed under the notion that this is at least partially an “up yours” to an ex.

Post wrote this one, and she takes the listener through the journey. She’s on the road — the verses start in Bristol, London and Philly — and wearing down, tired of the hotel TV and a little groggy. Oh, you want to break up? Yeah, she doesn’t need your shit right now, OK?

And it’s not her, it’s you. “You’re right where you always wanted to be. You can’t change.”

And she’s not getting out of your head. After the band drops out for a second to let Post deliver the seething “You monkey, you left me,” she taunts her ex. “And I know that you miss me by the way you kiss and resist me.”

In the first pass through the chorus, Post ponders the woman on her TV screen and directs everything to “her” — “it’s her thrill, it’s her wonder, it’s her will, it’s her way home.” In the second time through, it’s “your.”

Third and final chorus? “It’s my thrill, it’s my wonder, etc.” And “I’m right where I always dreamed I would be.”

Post may sound like a wounded animal at times on this track. But she’s got the power. She’s very much in control of her own life, and you blew it, you idiot.

The obvious signs point to Grohl. As the comments at Song Meanings point out, Grohl is in many ways “the last living rock king,” and the “monkey” could refer to the man who sang Monkey Wrench. But there was apparently a Periscope session in which Post said it was about Nick Cave. (I’ve yet to find any reason for the song to be called Shutterbug, a title reinforced by some camera-clicking effects on the recording but not much else.)

The song also may be three separate snapshots. There are two unattributed references around the interwebs suggesting the first verse is about PJ Harvey.

The thought of Nick Cave being the last living rock king is depressing on so many levels. So let’s fast-forward to the happy ending … Post and Gordon are both happily married by all accounts.

And back together. And sounding good, both on new material and classics like this. (No, I have no idea how to decode Laughing in the Sugar Bowl, I just know I was thrilled to hear it and even happier that my son frequently requests it in the car. He has great taste.)

They’re probably not going to bounce around in their underwear in an ornate setting as they did for this video, which raises a few more questions (among them: “How did they avoid banging into each other and giving each a concussion in those big swinging things?”). And they’re probably going to have to rely on ancient history if they want to write any more breakup songs.