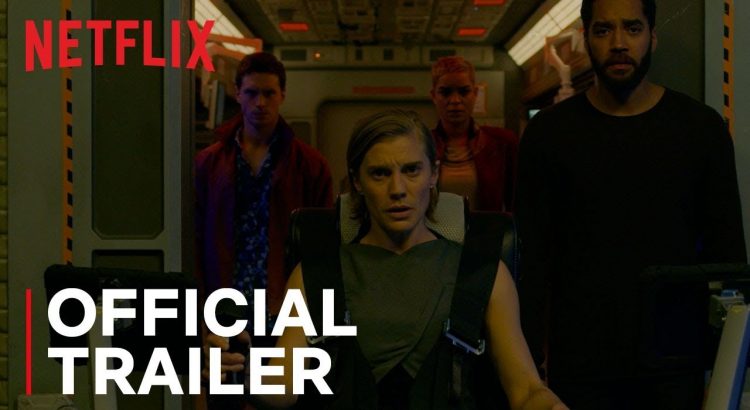 Katee Sackoff — who played Starbuck in the reboot of Battlestar Galactica — returns to space in the Netflix series, Another Life. The premise is fairly simple:  an alien probe arrives on Earth and crashes into a field somewhere in North America. Immediately, the probe starts to grow into roughly a five-story shape that looks like a bunch of rock candy piled on top of one another. Trying to determine the origins of the probe falls to Sackoff’s character, Niko Breckinridge. Niko leads a mission to the planet where the probe came from to figure out what the aliens want. On Earth, Niko’s husband Erik is a scientist who is trying to communicate with the probe to see if he can crack the communication code and determine if the aliens are friendly or hostile. Because plots are often driven by conflict, we get plenty of it in Another Life. The crew Niko commands is a group of young folks in their mid-20s who don’t know each other all that well, nor do they seem to like one another. Mostly, though, they don’t seem to like Niko — and the feeling is mutual. Niko is basically the “old person” among the crew, and the young folks tend to come off as sneering, dismissive, and sometimes kind of lazy. On Earth, it seems the problem of social media stars hasn’t ebbed one bit in this future. Selma Blair plays the influencer/journalist Harper Glass who has (as she is fond of repeating) 250 million followers. That makes her a formidable media presence during a time when the government is trying to keep information about the alien probe as quiet as possible (yeah, good luck with that).

So, you have Niko hurtling through space with her crew in the Salvare, Niko’s husband Erik trying to communicate with the probe while Harper Glass is trying to get him to spill it regarding the information the government has. Along the way, the crew has to stop on various moons and planets to get water, food, and oxygen — which is right about the point when the show goes off the rails. For those who suffered through two Alien prequels, you know that for some reason when smart people go into space, the get dumber by the minute. And so it goes with Another Life.  The first interstellar body the ship lands on is a moon to locate oxygen after the ship suffered a lot of damage and started to lose all-important air. And while the crew has to wear space suits on the moon, we get the microbiologist, Bernie, wanting to collect soil samples. Uh-oh. Nothing good can come of that when someone wants to start digging up dirt and other goo and bring it on board the ship. Other characters take off their space helmets when a cave where they are gathering material to make oxygen is found to have a breathable atmosphere. So, them being young and dumb (and getting dumber), breath in the air without thinking “Hey, what if in that sweet, sweet air we’re inhaling, there are some unknown space viruses that are being breathed in as well?” Guess what? They do bring a virus into the ship, and it resulted in temporary blindness for Niko, rage issues for another crew member, and an Alien-inspired neck burst moment for another crew member. Do you think they learned from that incident? Nope. Off they go to another planet where another alien probe is detected. When they arrive, Bernie wears a “space condom” (his words, not mine), only to shed it moments after getting to the planet. They are assured the ship’s AI interface “William” (played by Samuel Anderson) has checked out the planet and it’s totally safe. Right. That seal of approval from their AI turns out to be unreliable as the planet proves to be just as dangerous as the previous moon.

The moral of the story thus far seems to be:  people don’t learn.

Part of the problem with Another Life is that it’s not sure if it’s a science fiction show about space travel and first contact, or if it’s a CW soap opera. Too often there are moments where the adventure of the show gives way to who is hooking up with who, who feels jealous, spurned, in love, etc. Such whip-saw moments happen in each episode that one wonders if the blooper reel for Another Life is full of actors asking:  “Who wrote this shit?” It’s not that Another Life is completely horrible. Rather, any potential it has to add to the genre is squandered with a lack of focus, recycling scenarios from other, better science fiction films and TV shows, and a cliffhanger ending that makes one wonder if it’s even worth a second season.

Another Life is streaming on Netflix