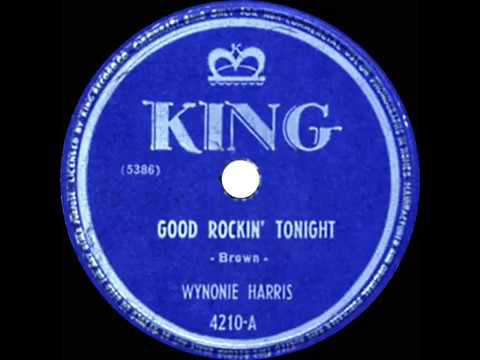 What was the first rock and roll song? It depends on who you talk to and to some extent how you define rock and roll. Some would say it was recorded Jackie Brenston who sang in Ike Turner’s band and hit pay dirt with “Rocket 88” in 1951. Others bestow the title on Billy Ward’s Dominoes who made it big with “Sixty-Minute Man” that same year. But go back three years earlier, to 1948, and there you will find the Wynonie Harris smash “Good Rockin’ Tonight.”

Harris was born in Omaha in 1915 to an unwed 15-year-old mother and an unknown father. At the age of 16, Harris had dropped out of high school. He didn’t start his show business career as a singer though, he began as a dancer. In the early 1930s Harris teamed up with Velda Shannon and by 1934 they were appearing regularly at Omaha’s Ritz Theater. The success of the dance team allowed Harris to earn a living as a performer, no small feat during the Great Depression.

One of the circuit stops for Harris and Shannon was Club Harlem and it was there that Harris began to sing the blues. In order to study the form more closely, he started to travel to Kansas City where he could see masters of the form like Jimmy Rushing and Big Joe Turner up close. Harris’ big break as a singer came at a club in Los Angeles where he earned the title “Mr. Blues.”

Harris toured continually and when the musician’s strike took place in the early 1940s, and no recording was allowed, all that was left was live performance. It was during one of these appearances, at the Rhumboogie Club in Chicago, that Harris caught the eye and ear of bandleader Lucky Millender. Harris was invited to join the band and soon thereafter he found himself performing at Harlem’s famed Apollo Theater for the first time.

The strike ended in 1944 and Harris went into the studio with Millender for his debut recording session. The band recorded five songs that day and Harris sang on two of them, “Who Threw the Whiskey in the Well,” and “Hurry, Hurry.” The session was for Decca Records but there was a war on and there was an embargo on the shellac needed to actually make the records.

The record was delayed but Harris kept gaining popularity as he toured the country with Millender. Eventually, a disagreement about money led Harris to quit the band in September 1945. When a promoter threatened to cancel a Millender gig in Houston because Harris was no longer with the band, Harris relented and returned to the band for the then handsome price of $100 a night, but that would be the last time Harris played with the band.

Decca finally released “Who Threw the Water in the Well” in April 1945. By July, the record was #1 on the R&B chart and remained in that spot for eight weeks, even attracting interest from a white audience, something unusual for that era. The Decca contract was with Millender so that meant that Harris could field offers from any record company for his solo career. He eventually landed with a label called Philo and employed Johnny Otis as his bandleader.

Harris, along with the band that Otis assembled for him, recorded a song called “Around the Clock” for Philo in 1945 and while it wasn’t a huge hit, it was a popular record spawning several high-profile cover versions. But Philo was just the beginning. Harris did sessions for labels like Apollo, Bullet, and Aladdin.

It was at Syd Nathan’s King Records that Harris broke through. In the late ’40s and early ’50s, Harris had a series of hits for the label including his 1948 cover of the Roy Brown tune “Good Rockin’ Tonight.” The record turned out to be Harris’ second #1 R&B hit, but the first under his own name. Three years later, Elvis Presley scored big with his version of the song. Other Harris hits of the era included “All She Wants to do is Rock,” “Sittin’ on it All the Time,” and “Bloodshot Eyes.” He even reconnected with Millender for “Oh Babe,” a #7 hit in 1950.

By 1954, Harris’ time at King Records was over and he recorded for various labels with no major success. He recorded six songs for Roulette in 1960 including a remake of his own “Bloodshot Eyes.” But Harris was known to be a carouser and he fell deeper and deeper into debt. In 1964 he settled in Los Angeles. There he would make his final recordings, for Chess Records, “The Comeback,” “Buzzard Luck,” and “Conjured.” Harris played his last big show at the Apollo in November 1967 on a bill that included legends Big Joe Turner, Big Mama Thornton, Jimmy Witherspoon, and T-Bone Walker.

By 1969, Harris was gone, a victim of cancer at the age of 53. As I said at the outset, it all depends on how you define it, but any discussion of the records that gave birth to rock and roll has to include Wynonie Harris’ “Good Rockin’ Tonight.”