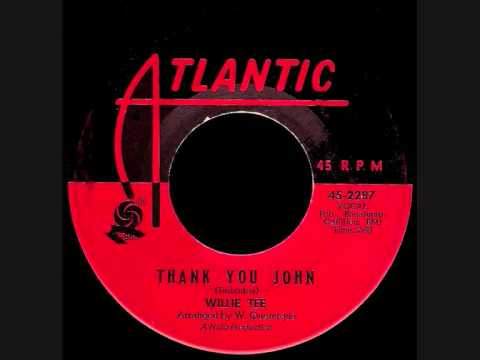 Wilson Turbinton was born in New Orleans in 1944 and raised in that city’s Calliope projects. His older brother Earl played the saxophone and by 1960 formed the Seminoles. The younger Turbinton had the good fortune of having as a music teacher the legendary Harold Battiste. History tells us that Battiste was an excellent judge of talent and when he saw it in Turbinton he added the young man to his AFO (All For One) Band. The band also included the New Orleans icon Ellis Marsalis on piano.

As a part of the arrangement with Battiste, Turbinton, by then Willie Tee, recorded for the AFO Records label. In 1962, Tee released his debut single for the label, “Always Accused.” It wasn’t a hit but it served to establish the blend of jazz and R&B that Tee would pursue for the balance of his long career. It wasn’t long before Tee left AFO. He played with a band called the Souls for a little while and then signed with the NOLA label. In 1965, Tee released his first single for NOLA and “Teasin’ You” became the label’s first hit. Somehow the local hit found its way to L.A. and the Righteous Brothers covered it on the Shindig! television show.

The success of “Teasin’ You” came to the attention of Atlantic Records and they made a deal to distribute the single nationally. With a B-side called “Walking Up a One Way Street” the single didn’t make much of a dent on the pop charts but it came very close to the Top 10 on the R&B chart. Tee’s next single for the label was “Thank You John” and it failed to chart at all but it became a classic in the canon of Carolina Beach Music and was covered by Alex Chilton.

Atlantic gave up on Tee after his next single, “I Want Somebody (To Show Me the Way Back Home),” also failed to chart. Tee returned to NOLA Records and released “Please Don’t Go” on the label’s Hot-Line imprint but neither that single or the follow-up, “Ain’t That True Baby” managed any charged success. By 1968, NOLA was out of business and Tee was on his own once again.

Tee hadn’t found much success as a recording artist so he turned to production. He worked with Margie Joseph on her 1969 Volt Records classic “One More Chance.” Tee’s piano playing eventually came to the attention of Cannonball Adderly who helped Tee to get a deal with Capitol Records. There, in 1970, he released his first album I’m Only a Man. But success as a recording artist continued to be elusive for Tee and his time with Capitol was short.

Tee then re-formed a band he had been in earlier with his cousin Ulis Gaines. Gatur released the ballad “The Man That I Am” and followed that with the funky singles “Your Love and My Love Together” and “Swivel Your Hips” that pointed to a new direction for Tee. In 1973, the Wild Magnolias Mardi Gras Indian Band enlisted Tee to put together a backing group for an album they were recording. He brought his older brother Earl and guitarist Snooks Eaglin and composed all of the music incorporating elements of funk and Afro-Cuban music and rearranging some New Orleans classics. The resulting album became one of the most beloved albums in Crescent City music history. The album was noted for spreading the Native American Mardi Gras culture to a worldwide audience.

In 1976, Tee decided to try his hand as a solo artist again. He signed with United Artists and released his second album, Anticipation. It was the last album he would ever make for a major label but he continued to play the clubs with Gatur. In 1988, Tee and his brother Earl made a jazz album for Rounder called The Turbintons. Eventually, Tee became a favorite on the Northern Soul scene in England and his music was sampled by hip-hop artists like Sean “Puffy” Combs and the Geto Boys.