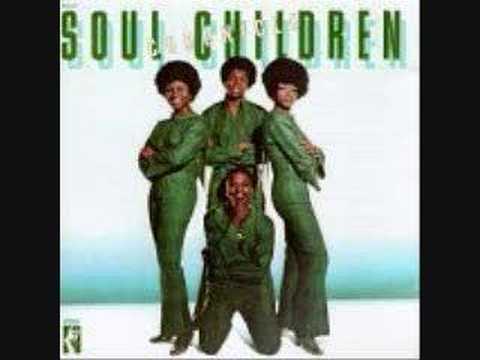 We’ve heard about one-hit wonders and even no-hit wonders but what about groups that had multiple hits and still manage to be forgotten when people talk about classic soul? The Soul Children recorded for Stax Records at the height of the label’s popularity, they had three Top 10 pop hits, and they were mentored by the legendary songwriting/producing team of Isaac Hayes and David Porter. And yet they’re often not even part of the discussion of the glory days at Stax.

Hayes and Porter put the Soul Children together in 1968. The lineup included two women and two men and the intention was that the group would take up the slack left at Stax when Sam & Dave had to return to Atlantic Records after the infamous contract dispute between the two labels. The original Soul Children lineup included Norman West, John Colbert (a.k.a. J. Blackfoot), Anita Louis, and Shelbra Bennett. Colbert already had a career that included some solo singles as well as a stint as the lead singer for the Bar-Kays when they reorganized after the plane crash that killed four members of the group as well as Otis Redding. Louis sang backup on some Hayes/Porter productions, Bennett was a singer signed to Stax, and West had replaced William Bell in the Del-Rios but hadn’t found any success as a solo act after that.

“Give ‘Em Love,” a Hayes/Porter production, naturally, was the debut Soul Children single in 1968. The single’s Top 40 success on the R&B chart pointed to even more success ahead. That promise was realized when the group’s second single, “I’ll Understand,” did even better, reaching the #29 spot on the R&B chart. Still, pop success was proving to be elusive until the Soul Children released their fourth single, “The Sweeter He Is.” The two-part single was a Top 10 hit on the R&B chart and the group finally found some pop success when the record managed a #52 showing on the pop chart. As was the case with nearly all of the Stax Records of the day, the backing musicians on the Soul Children records included luminaries like Steve Cropper, Al Jackson, Jr, Duck Dunn, and Hayes himself.

The group only had a minor hit when they tried their luck with a slowed down version of the Sam & Dave smash “Hold On I’m Coming.” The single managed to crawl into the R&B Top 50 but did not cross over to the pop chart. The fate of the Soul Children seemed to be sealed when Hayes stopped working with them in order to focus on his solo career. They didn’t give up, however. They recorded a couple of albums including one at Muscle Shoals and released several unsuccessful singles. Then, in 1972, the Soul Children made their comeback with “Hearsay,” a song written by West and Colbert that turned out to be their biggest hit to date reaching #5 on the R&B chart and #44 on the pop chart.

The Soul Children appeared at the legendary Wattstax concert in Los Angeles in 1972. After a few less successful singles, the group returned to the upper reaches of the charts in 1974. “I’ll Be Your Other Woman” turned out to be their biggest hit, reaching #3 on the R&B chart and #36 on the pop chart.

Storm clouds were hanging over Stax when the Soul Children left the label in 1975. At the same time Bennett, who had sung lead on “I’ll Be Your Other Woman,” changed her name to Shelbra Deane and left the group for a solo career. The remaining trio signed to Epic Records in 1976. They had some success with singles for the label notably the #19 R&B hit “Can’t Give Up a Good Thing” in 1978. During their time at Epic, the Soul Children reunited with Porter who produced an album called Where Is Your Woman Tonight? in 1977. When Stax was resurrected by Fantasy Records in the late 1970s, Porter brought the group back home. Unfortunately, the one album that the group recorded for the newly reconstituted label, Open Door Policy, was not successful and they decided to call it a day in 1979.

The Soul Children put 15 singles into the R&B charts and five on them into the pop chart. When the subject of classic soul comes up they have earned a place in the discussion.