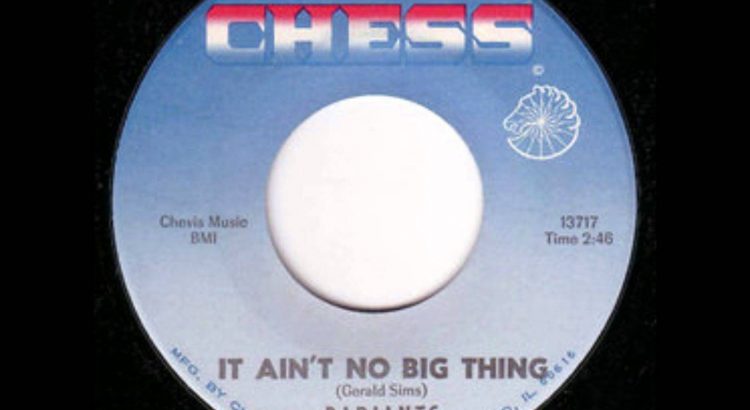 Chicago has been known as a blues mecca ever since giants like Muddy Waters and Howlin’ Wolf made their way north from Mississippi seeking greater opportunity. In fact, the electrified and electrifying sound they and others developed would come to be known as Chicago Blues. But the music coming out of the Windy City was not limited to blues. Soul music giants like Curtis Mayfield and the Impressions, Jerry Butler, and Billy Stewart called Chicago home as well.

The Radiants never quite reached the level of success that the artists I mentioned above achieved but they did manage to send a few records up the charts in the 1960s. The group’s original lineup of lead vocalist Maurice McCallister, baritone Wallace Sampson, second tenor Jerome Brooks, bass singer Elzie Butler, and first tenor Charles Washington met while they were singing in the youth choir at Greater Harvest Baptist Church. Like other artists who got their start in church, the Radiants began their career singing gospel in churches but also adding in some secular R&B songs that McCallister wrote.

It wasn’t long before the Radiants abandoned gospel altogether. Before their first recording session, Washington had left the group and been replaced by McLauren Green. The group recorded demos and shopped them around but couldn’t get a bite. All of the big labels turned them down including Motown and Chess. But Chess eventually had a change of heart and signed the Radiants.

At Chess, the group was mentored by Billy Davis, one-time songwriting partner of Berry Gordy, Jr. The Radiants’ first single for the label was released in 1962. “Father Knows Best” b/w “One Day I’ll Show You” was unsuccessful everywhere with the exception of Cleveland, where it was a local hit. Chess singles “Heartbreak Society,” “Shy Guy,” and “I Gotta Dance to Keep My Baby” followed and while they all sounded like hits, none of them were. Poor promotion by the label seems to have been the culprit.

Green was drafted and he was replaced by Frank McCollum. But by 1964 the Radiants were in disarray. Things got so bad that the group actually broke up, leaving only McCallister and Sampson to form a new lineup. Leonard Caston, Jr. had been the organist at Greater Harvest and his return from the army was timely as he became the third member of the new Radiants lineup.

Now a trio, the Radiants released “Voice Your Choice” in late 1964. It was their biggest hit, reaching #16 on the R&B chart, and #51 on the Billboard Hot 100. The follow-up single was “It Ain’t No Big Thing” and although it failed to make the Pop chart, it reached #14 R&B. The Radiants modeled themselves after the Impressions on these records, with McCallister and Caston trading lead vocals, and employing the Impressions three-part harmony style.

Caston had his eye on a songwriting and production career and left the Radiants in 1965. James Jameson replaced him and he can be heard on the single “Baby You Got It.” That’s about the time that things got complicated. McCallister left the group shortly after the single was released and the departure of the group’s founder should have put an end to things, right? Well, no.

There was another Chess group called the Confessions and they were led by a guy named Mitchell Bullock. They recorded a single called “Don’t It Make You Feel Kinda Bad” but broke up before it was released. Davis had the idea of enlisting Bullock to work with Sampson and Jameson. When they added Caston’s brother Victor, the Radiants were a quartet again. Remember that Confessions single? Without re-recording it or changing anything Chess released it as a Radiants single.

McCallister went on to have some success with as part of a duo that also included former Radiant McLauren Green. They two collaborated as Maurice & Mac on a single called “You Left the Water Running” which is revered by soul music aficionados. Chess never released a Radiants album but did include several of the group’s singles on compilation albums.