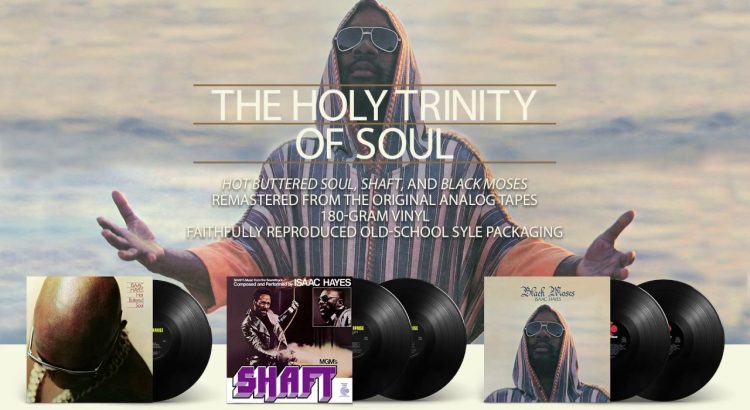 Isaac Hayes began his career as a session musician. He was called on to sub for Booker T. Jones when Jones was at school, studying for his music degree at Indiana University. There were occasions, however, when both keyboard players appeared on the same record. Obviously, Hayes’ talent as a keyboard player was acknowledged by Stax management but I wonder if anyone knew at the time that one day he would be the savior, at least temporarily, of the company that he was playing occasional piano for.

For Hayes, there was a step in between his role as a session keyboard player and his ascent to the heights as a solo star. Before he made his own records he wrote hit songs for other artists, notably Sam & Dave. Teaming with David Porter, the pair penned smashes like “You Don’t Know Like I Know,” “Soul Man,” “When Something Is Wrong with My Baby,” and “Hold On, I’m Comin’.” Hayes and Porter also produced records by Sam & Dave, Carla Thomas, and other Stax artists.

By 1969, Otis Redding, the biggest star on the Stax roster, had been killed in a plane crash. Shortly after that, the label lost all of its master recordings when Atlantic was sold to Warner Bros.-Seven Arts and the distribution contract between Stax and Atlantic was terminated. According to the terms of that contract, if that contract was terminated the Stax master recordings would belong to Atlantic, now part of Warner Bros. Stax was left with nothing to sell and needed fresh product immediately.

Al Bell was an executive vice president at Stax at the time but in reality, he was running the show by then. He issued a call for a mind-boggling 27 new albums to be released by the label in 1969. The most successful of these new albums was Hot Buttered Soul, the second solo album (the first one hadn’t gotten much attention) by Isaac Hayes. Hot Buttered Soul featured a stunning cover photo and extended versions of songs like Burt Bacharach and Hal David’s “Walk on By” (12:03) and Jimmy Webb’s “By the Time I Get to Phoenix” (18:42). The album topped the R&B chart and rose to #8 on the Billboard Hot 100.

Hayes’ success continued with subsequent album releases The Isaac Hayes Movement (#1 R&B, #1 Jazz, #8 pop) and …To Be Continued (#1 R&B, #1 Jazz, #11 pop). In 1971 Hayes wrote music for the blaxploitation film Shaft. If anything, his wah-wah (played by the late Skip Pitts) driven title song surpassed the film itself in terms of success. The single was #1 for two weeks on the Billboard pop chart. The other two vocal tracks on the album, “Soulsville” and “Do Your Thing” also became hit singles. “Theme from Shaft” won Hayes an Oscar for Best Original Song. He was also nominated by the Academy that year for Best Original Dramatic Score.

Hayes wasn’t done by a long shot, however. Later in 1971, he released a double album called Black Moses. The big hit single from that album was the Hayes take on the Jackson 5’s “Never Can Say Goodbye.” The album also included unique Hayes versions of Bacharach-David songs “(They Long to Be) Close to You” which had been a hit for the Carpenters, and “I’ll Never Fall in Love Again,” originally a hit for Dionne Warwick. The Friends of Distinction (“Going in Circles”) and Johnny Taylor (“Part Time Love”) were also covered. Hayes considered Black Moses to be his most personal album.

The three Hayes albums, Hot Buttered Soul, Shaft, and Black Moses, became known in some quarters as the “Holy Trinity of Soul.” It has been a long time since any of the three have been available on vinyl. A few weeks ago Craft Recordings released remastered (from the original analog tapes) versions of all three of the classic albums on 180-gram vinyl. The producers have faithfully reproduced the covers and all of the original artwork for the albums and the Black Moses album even includes the cross-shaped fold out that became legendary.