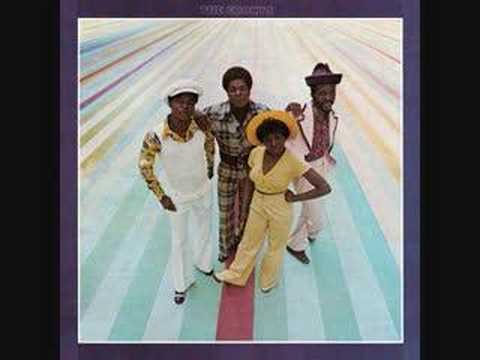 Camden, New Jersey has fallen on hard times in recent years but at one time it was not only a manufacturing center but its close proximity to Philadelphia made it something of a sub-capitol for the Philly Soul sound. As a matter of fact, one of the pioneers of that sound, Leon Huff, was born and raised in Camden. And it was Huff, together with partner Kenny Gamble who eventually signed the Ebonys to their newly-formed Philadelphia International label.

The Ebonys were led by David Beasley who founded the group and added Jennifer Holmes, Clarence Vaughan, and James Tuten to the lineup. They took their name from a copy of Ebony Magazine that Holmes was reading in their rehearsal space, which happened to be her living room. As high school students, they began singing in talent shows and eventually graduated to club performances.

The quarte got a record deal with the Philadelphia-based Avis Records and released their first single, “Back in My Arms,” in 1969. The record label billed them as the Ebony’s. They followed that up with another Avis single called “Many a Man.”

Beasley thought the Ebonys were ready for a step up so he arranged an audition with Gamble & Huff. They passed on the group the first time around but in a case of ‘it’s not what you know, it’s who you know’ the Ebonys took on a manager by the name of Gerald Wilson who knew Huff. Wilson brought the group back to Gamble & Huff for a second audition. They sang the same songs but this time the Ebonys got signed to Philadelphia International.

The group recorded its first single for PIR at the legendary Sigma Sound Studios with backing by MFSB on a song written by Gamble & Huff and arranged by Thom Bell. No group anywhere could ask for more of an all-star team at that time. The resulting single was “You’re the Reason Why” and it was a hit, reaching the Top 10 on the R&B chart in 1970 and finding crossover success on the pop chart as well.

The follow-up single was called “Determination” and it didn’t quite deliver on the promise of “You’re the Reason Why,” just managing to scrape into the Top 50 on the R&B chart. “I’m So Glad I’m Me” failed to make any dent at all but the next single, “It’s Forever,” brought the Ebonys back to the charts, reaching #14 on the R&B chart in 1973.

Despite their best efforts, the Ebonys could never seem to get ahead. They didn’t really have proper management (Wilson was a bar owner) or a booking agent and so even though the records got some attention the group never got to play the venues they should have. Even nearby Atlantic City was out of their reach in terms of live shows.

Despite the lack of overall success, the Ebonys continued to show up on the charts, reaching #34 with “I Believe” in 1974. Their final PIR single, “Life in the Country” reached #69 later that year. The label had released a debut album for the group a year earlier and a second album, compromised mostly of Gamble & Huff songs, was recorded but not released. According to Beasley, Gamble had a problem with Tuten’s drug use and dropped the Ebonys from the label.

Wilson got the Ebonys a deal with Buddha Records. There they released one last chart record, “Making Love Ain’t No Fun (Without the One You Love).” The label also released an album called Sing About Life but there was no promotion for it and there were no gigs to support it.

“There was no promotion on that album. We never were anywhere. We never performed any of those songs on the stage,” Beasley told soulexpress.net.

The Ebonys broke up in 1976. Holmes went on to sing with Creme D’Cocoa and Beasley eventually began a solo career on weekends away from his day job. It was in this capacity that he finally got to sing in Atlantic City. He finally got the group back together, albeit with a new and constantly changing lineup, in 1997. Beasley began to feel the effects of vertigo and decided to retire in 2001.

That wasn’t quite the end of the group though. A replacement came in and in 2003 an entirely new group of Ebonys released an album called That’s Forever. At one point two different groups of Ebonys were performing. In 2015 Beasley put together a group called David Beasley’s Fabulous Ebonys and released an album called Anything That You Want. The album was recorded back at the scene of the Ebonys early success, Sigma Sound, and included new recordings of four songs from the glory days.