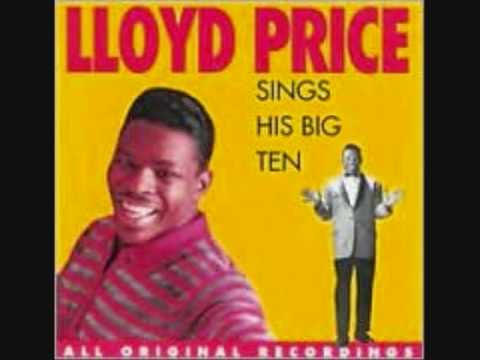 In the last couple of years, we have had powerful returns to form from classic soul men William Bell and Don Bryant. Now we can add Lloyd Price, whose new album This is Rock and Roll will be released on September 22, to that list. In honor of the occasion, I thought I would take a look at one of Lloyd’s greatest hits this week.

Price was born on the outskirts of New Orleans and got his start singing and playing piano and trumpet in his church’s gospel choir. He got his big break when Art Rupe came to town in 1952. Rupe owned the Los Angeles-based Specialty Records. He got word that something was happening in the Crescent City and when he arrived there he found that Lloyd Price was very much a part of what was happening.

Price had a song called “Lawdy Miss Clawdy” that Rupe thought would be a hit. He hired ace arranger Dave Bartholomew to work on the record and Bartholomew’s band was there too, a band that included Fats Domino on piano. As it turned out, Rupe was right. “Lawdy Miss Clawdy” was a smash. The follow-up, “Ooh, Ooh, Ooh” didn’t do quite as well and subsequent Specialty singles failed to chart.

In 1954, Price was drafted. When he got out the service he found out that he had been replaced at Specialty by Little Richard. To add insult to injury, Larry Williams, who had been Price’s chauffeur, was having hits for the label. That door closed, Price used the opportunity to start KRC Records along with Harold Logan and Bill Bosken. When the label’s first single, “Just Because,” was picked up by ABC Records for distribution it became a hit. It was the first of several national hits that Price had for the label. “Just Because” was followed by “Stagger Lee,” and “Personality.”

“Personality” was written by Price and Logan and recorded in 1959. The ABC-Paramount single reached #2 on Billboard Hot 100 that year and also climbed to the top of the R&B chart and remained there for four weeks. Billboard named “Personality” the #3 song of the entire year. “I’m Gonna Get Married” was another Top 10 hit for Price in that era. The hits led to Price television appearances on Dick Clark’s American Bandstand and the Ed Sullivan Show.

In 1962, Price founded another label with Logan, this one called Double L Records. One of the labels earliest signings was Wilson Pickett. Seven years later, Logan was murdered. Price, on his own, started a label called Turntable and opened a club in New York with the same name. Price proved to be an astute businessman. In addition to the club, he became a builder, erecting 42 townhouses in the Bronx, and promoting fights with Don King including the Ali-Foreman “Rumble in the Jungle” in 1974.

Price was not done with music, however. In 1993, he toured Europe with Jerry Lee Lewis, Little Richard, and Gary U.S. Bond. More recently, in 2005, there was the “Four Kings of Rhythm & Blues” tour which featured Price along with Jerry Butler, Gene Chandler, and Ben E. King.

And that brings us to the new Lloyd Price album, This is Rock and Roll. The album is a winning combination of new Price songs including “I’m Getting Over You,” “The Smoke,” and the funky social commentary of “Nobody Loves Anybody Anymore.” When Price turns to covers of classics like “Blueberry Hill,” “I Can’t Help Myself,” and Jimmy Reed’s “Peepin’ and Hidin’” (recorded live in New York City) he brings his own unique twist to the old chestnuts. He is at his best, however, on an emotional cover of Carole King’s “Will You Still Love Me Tomorrow.”

This is Rock and Roll was recorded primarily at City Lights Studios in Farmingdale, New Jersey with studio owner Guy Daniels producing. The sessions yielded 27 songs and Price chose the ten that he felt sounded like “a reflection of the past but still right now.”

Lloyd Price was inducted into the Rock and Roll Hall of Fame in 1998, and the Louisiana Music Hall of Fame in 2010. The new album will be available digitally tomorrow at iTunes, and Amazon. The CD can be purchased at Price’s website.