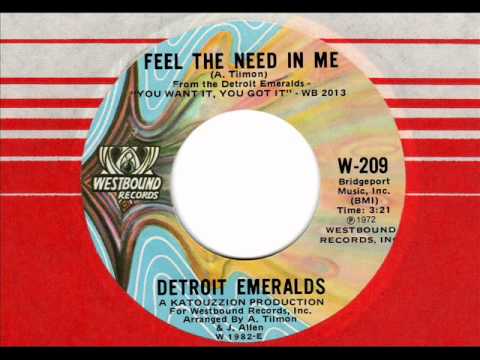 They weren’t from Detroit. That’s probably the first thing to know. In the tradition of the Five Chinese Brothers, who were neither Chinese nor brothers, we have the Detroit Emeralds. The four brothers who formed the lineup were from Little Rock. Ivory, Abrim, Cleophus, and Raymond Tilmon called themselves the Emeralds at first. When Cleophus and Raymond left the group, a childhood friend named James Mitchell joined and the trio moved to Detroit. There they became the Detroit Emeralds.

In 1968 the group signed with Ric-Tic Records and it was there that they had their first R&B hit “Show Time.” Two years later the Emeralds were recording for another Detroit label, Westbound. They were on tour in Memphis when they recorded some demos at Willie Mitchell’s Hi Recording Studios. With basic tracks recorded by the hit-making Hi Rhythm Section, the Emeralds returned to Detroit where they added vocals, horns, and strings to the tracks. All of the tracks were written by Abrim Tilmon.

“Feel the Need In Me” was not their biggest hit but it is without question the song for which the Detroit Emeralds are most remembered. It reached #22 on the R&B chart in 1973 and it was a Top 5 single in the U.K. Unfortunately, the success brought problems and by the following year, things were not looking good for the Detroit Emeralds.

It’s never a good sign when two groups are touring with the same name, and by 1974 there were Detroit Emeralds led by Abrim Tilmon and another group by the same name that included James Mitchell and Ivory Tilmon. There was a coalescing of the groups in 1977 when Abrim joined Ivory and James Mitchell for a reunion tour. Talks were taking place with an eye toward another reunion tour when Abrim Tilmon died suddenly in 1982 from a heart attack. He was only 37 years-old. Mitchell, Ivory Tilmon, and Marvin Willis continued to tour the club circuit as the Detroit Emeralds for several years.

“Feel the Need In Me” has been covered several times over the years including versions by Graham Central Station and Bryan Ferry. Other Emeralds’ songs have been sampled by artists including Nas, Raekwon, Limp Bizkit, Kendrick Lamar, De La Soul, Method Man, and J Dilla.