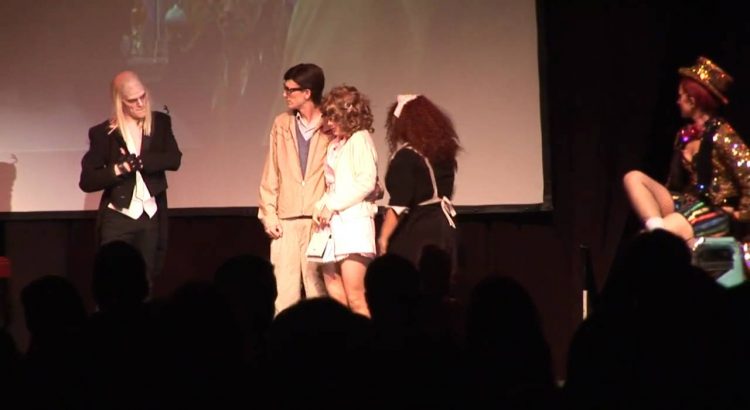 The fandom behind The Rocky Horror Picture Show is something I have never really understood. I’ve tried to, because for more than forty years, Rocky Horror has been the yardstick by which other cult films are measured. It’s certainly a unique film that explores themes and tropes that are still dangerous for most studios. If I don’t understand the appeal, then I feel like I’m forever doomed to a diet of bland movies.

The Rocky Horror Picture Show is something that tries to combine the sexual revolution with classic Hollywood in the same way Kenneth Anger did when he published Hollywood Babylon. The point of the film is to show all the sexual undertones that were present in the original genre pictures the Post War audience absorbed during their “science fiction double features.”

But the film doesn’t work. I like the ideas, but they join together in a coherent whole. The songs do nothing to contribute to the narrative, the structure is nonsensical, the film doesn’t end so much as stop, and the film doesn’t seem nearly as shocking as it once did. You mean there are men that sometimes put on women’s clothing? Surely not!

But maybe that’s how it still finds its audience. Rocky Horror has basically swung around to be the sort of thing that it was once parodying. People who watch Rocky Horror aren’t expecting to be shocked.

But then, why does it persist? According to the official website, as of this writing, there are still 90 showings of Rocky Horror somewhere in theaters. And luckily, one of them happens to be near me. Better still, I personally know the host of the show and saw her perform Rocky Horror hosting duties at this year’s Dragon*Con.

So, I sat down with Lips Down on Dixie’s Shadowcast director and Master of Ceremonies Candace Weslosky to try to learn what, exactly, Rocky Horror has meant to people for the past 43 years. Lips Down on Dixie currently hosts the largest annual Rocky Horror screening in the world. If anyone can explain it to me, it’s her.

Weslosky, an Ophthalmic Technician in her civilian life, has been with Lips Down on Dixie since it started 18 years ago.

“There were originally three groups,” she explains. “Lips Down on Dixie, LTP, and N9. All the members had a different view on how it should be done. Should it be serious? Should it be jokey? So, we had a theater in Marietta, GA and would alternate weekends. Those other two groups are defunct.”

Where did the Lips Down on Dixie name come from? “I actually voted against it,” Weslosky said. “Historically, names are taken from a quote in the movie. I wanted to call us the Rich Weirdos. I thought Lips Down on Dixie was blasphemous. But the name is a sexual innuendo, it explains Rocky, and it explains our demographic.”

“The people who voted for the name have since left the group,” she added with a laugh.

So, what about the audience who comes to the show week after week? To an outsider like me, the only way that something like Rocky Horror can survive is if there are new people who are discovering it and that, as more people grow up, they view the show as a coming of age ritual. But that’s not always the case, according to Weslosky. There is a generational gap, as people bring their younger siblings or even their sons and daughters to the screenings, but the people who come to the shows slowly become an extended family.

As Weslosky explained, “A divorced dad, the cool dad, would bring his teenage daughter to the show. It was the special show they could do. I remember seeing her growing up. Unfortunately, her dad passed away. She called me and said, ‘one of my favorite memories is going to Rocky Horror every other week.’ I was asked to do his eulogy. It was one of the most moving things I’ve ever been asked to be a part of. I realized, ‘this is the moment when you touch people’s lives.’ You’re helping them grow up.”

That story reminded me of something about films. Sometimes, the quality of the film is irrelevant compared to the memories people grow to associate with them. It doesn’t matter if the film you went to on your first date was a bad movie. People will remember what their date was wearing and still regret that dumb joke they made before the lights went down. It’s the experience that’s attracting the audience, not necessarily the film.

But what does Weslosky think of the film itself? “I think it’s a fun musical. I used to say it was good, but bad. But I can watch the movie while munching popcorn. I’ve seen some truly impossible films where I say, ‘I can’t watch this movie.”

The Rocky Horror Picture Show still seems like an underground oddity, compared to some other revered cult films like This is Spinal Tap or Night of the Living Dead. Those have been referenced by several other filmmakers. But Rocky, despite multiple revivals of the play and even a remake for prime-time television, feels like it never made that leap. Weslosky thinks that’s because of its genre rather than its perceived transgressions.

“I think the MPAA would rerate it the movie to PG-13 if it were released today. It’s risqué, but I’ve seen more risqué stuff on Adult Swim.” Weslosky said. “I don’t think a musical ever will be mainstream. The most mainstream musical is The Sound of Music. Everyone’s willing to watch a sci-fi movie or a horror film. At its core, Rocky Horror really is a musical. It will always have that challenge. It’s a little jewel that only some of us will know about.”

Whatever the reason, so long as people keep coming, Weslosky will continue with Lips Down on Dixie.

“This is my last year directing. But as long as Lips Down on Dixie is at the plaza, I can see myself do it forever. I want the cast to do well, I want the audience to have a good show, and I want the Plaza to succeed. It’s such a gem and I want to take care of it. And I only need to make sure the show changes one person’s life.”