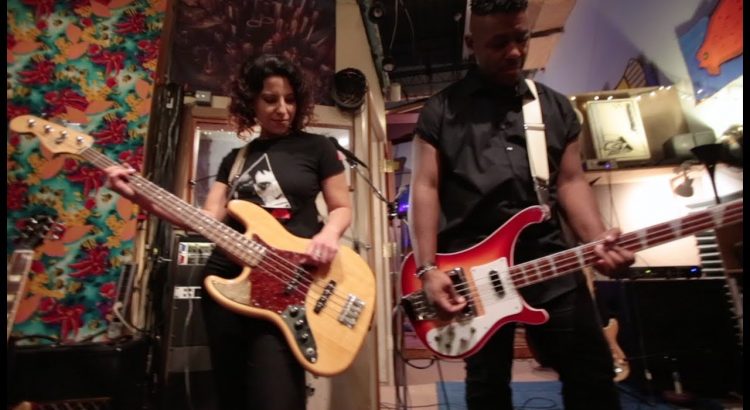 It’s no secret how much Popdose likes Lisa Said.  And it should come as no surprise that this first E.P. with her new band, Piramid Scheme, is on par with the releases we’ve reviewed here.  A crisp five songs, Get Rich Quick Too has all the elements of what makes Ms. Said’s music so good, except in a band scenario, it has even more punch.

“Bandwagon Jumping Machine” is a stellar opener, with a galloping riff and rhythm; Ms. Said’s sultry vocals buried in the mix to add an air of mystery and ripe with melody; “No More, Anymore” is what I like to think of as “super rock” – power pop with an extra wallop.  It’s a hypnotically swirling number with clean riffs and a pulsing rhythm.  “Next Hero” reminds me of New Adventures In Hi Fi-era R.E.M. – a godwash of guitars that quiet down and then build up into an explosion of heaviness; “Regular Guy” (which we premiered here) is the closest to a “Lisa Said-style” track – very Lou Reed-ish, filled with texture and, again, melody, which Ms. Said delivers so well and “Pay2Play” is the E.P.’s magnum opus – veering into Lush/My Bloody Valentine territory at moments but never becoming abrasive.

The beauty of this E.P., aside from it being a great introduction to a fine new band is that the songs (and subsequently the players) know when to cut loose and know when to restrain themselves.  That says they know what to do and how to do it right.  And with Lisa Said’s songwriting talents guiding the direction, I think we’re going to hear more quality releases from this group.