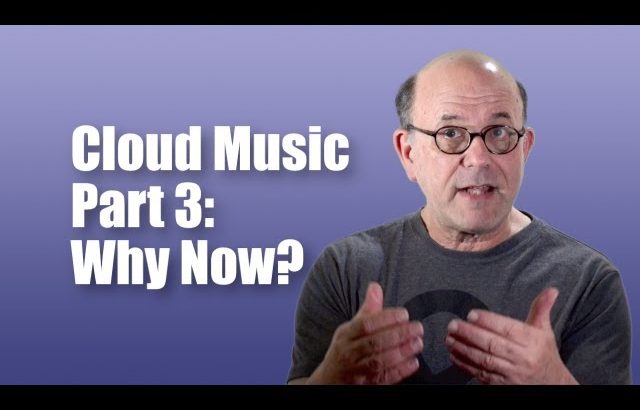 
Why is Amazon willing to lose money signing up people for their cloud music services?

Part one covered the What?

The cloud is the internet.

Cloud storage is storage on somebody else’s hard drive somewhere out on the Internet.
And there are thousands of services offering it.

Amazon is pushing a cloud storage service for music (and other things) called Cloud Drive. And a streaming player called Cloud player.

They’re pushing it so hard that they’re practically giving it away. They even sold lady Gaga’s album at a loss to pull people in.

Part two we covered the Why

And we covered the Why
Apple dominates online music sales through iTunes.

Amazon has been able to take share from other players, but hasn’t dented Apple’s dominance.

Amazon has been able to take share from other players, but hasn’t dented Apple’s dominance. Both Apple and Amazon grew year to year.

And that’s certainly worth a few million dollars to Amazon.

But if you look at platforms, the picture is different. Combine all the Android phones together, and Android is the dominant platform

Part three let’s look into Why Now? Let’s get started.

Amazon might want to move quickly for three reasons.

One: they don’t have the Android world all to themselves.

Apple’s not there. But Google is.

Android launched with its own place to buy apps: Android Market. Amazon popped in with a competitor: The Amazon App Store. Which is fighting to win customer loyalty.

But In music—Amazon is first to the party. They’re already selling music. And they want to grab as much territory as possible before Google shows up.

With their own cloud music service. It’s on the way. They’re already testing it as Google Music Beta. Invitation only.

In broad outline very similar to Amazon’s music service. Upload your music to the Cloud. Stream it to your phone, or play it on your PC. Pricing free. (for now, anyway) You can store up to 20,000 songs.

The biggest difference between Google Music and Amazon’s Cloud Player? You can buy music from Amazon. You can’t from Google.

But it’s not hard to imagine that Google will add a store. In fact, you don’t have to imagine it.

The people at a site called androidandme went poking around in the resource files of the Google Market app. And look what they found: icons for shopping bags. All color-coded: red for Movies, green for apps, blue for books. and orange for music. Orange. Hmm. Just like the Google Music site.

Of course, Google can’t turn on their music store until they have a deal with the music companies. And there’s no public information about where that stands.

And Apple is upping its game this fall with new phone models, a new version of iOS, and there own cloud service. iCloud has some uniqure advantages—and one huge gap: no streaming.
.
The third reason is a looming threat to music sales on all four platforms: Apple, Amazon, Microsoft, and Google. This one’s a biggie—and deserves it’s own video. So I guess that means Part IV.
Until Next time… I’m Mickeleh.