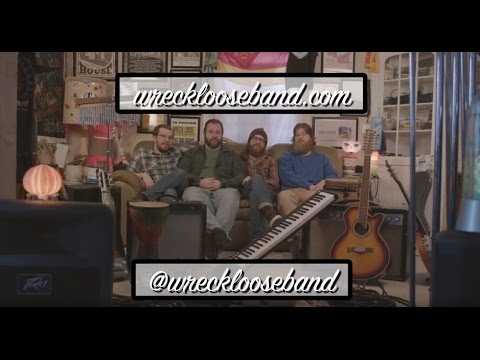 From the first, forceful moment of their debut full-length album, OK, Wreck Loose, Pittsburgh-bred Wreck Loose announce themselves as heirs to the tradition of loud, thoughtful pop rock that dominated AM radio in the 1970’s. Their sound combines a bright piano and analog guitar with lyrics that are both quirky yet introspective, for a sound that remains modern yet consistently steeped in pop music tradition, which is no easy feat.

On OK, Wreck Loose, the band marries big rhythms to off-beat lyrics that are paradoxically epic and vulnerable. Songwriter Max Somerville tells small-scale stories of tragedy and redemption, followed by mountain-high tales that still seem intimate. The album kicks off with “Long Time Listener, First Time Caller,” telling its tale of personal demons and music’s redemptive power – and if you listen closely, you get flashes of The Band and Little Feat. “Carwash” recounts an experience with everyday existentialism and shows off the band’s ability to slow things down, while songs like “Hard Drugs” and “The Day Before The Day Of The Dead” both showcase the band’s talent for unconventional titles and mix strong melodies and hooks with explorations of genre and space.  It also shows a wry, yet subtle sense of humor.  The Harry Nilsson-esque “I Do Right” is one of the most joyful sounds of piano and guitar I’ve heard in years and the subtle groove makes it more danceable than most tracks meant for the floor; “Country Mouse”, with its clever title hinting at the song’s flavor is, indeed, a rolling honkytonk-styled track that lets you relax and kick back with melodic pleasure and the very ’70’s opening to “Heart’s Been Broken” belies the wild rollercoaster nature of this intensely rockin’ piece.

At the end of the day, Wreck Loose grooves nice and strong.  Which makes this an uplifting album, considering the vast lyrical landscape they paint.  So okay – Wreck Loose and have a good time doing so.