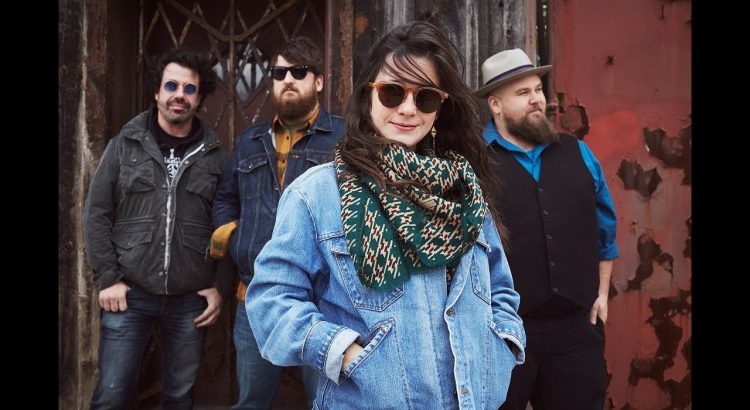 The Claudettes fuse Chicago piano blues with the full-throttle energy of rockabilly and punk and the sultriness of ’60’s soul to write a thrilling new chapter in American roots music. Johnny Iguana pounds the piano alongside seductive singer Berit Ulseth, with bassist/singer Zach Verdoorn and drummer Danny Yost holding down the rhythm. Johnny, who toured for years with his cult-favorite rock band, “oh my god”, is also a member of the Grammy-nominated groups Chicago Blues–A Living History and the Muddy Waters 100 Band. He has also toured/recorded with Junior Wells, Buddy Guy, Otis Rush and more. The band recorded this new album (their 3rd), Dance Scandal At The Gymnasium, with Grammy-winning producer Mark Neill (Black Keys, Paladins, Old 97’s, J.D. McPherson).

Bold and strident, “Don’t Stay With Me” opens the album with a deep, heavy sound and Ms Ulseth’s vocals are instantly seductive and warm; “November” is somewhat cacophonous and ponderous; “Give It All Up For Good” has a boogie vibe with a Dr. John feel, overall; “Pull Closer To Me” is a slower but sweet piece about relationships; “Infuential Farmers” also left me a little puzzled because the lyrics aren’t clearly audible, although the performance has a fierce intensity.  “Utterly Absurd”, the album’s closer has a sort-of ’60’s spy vibe but, yet again, the vocals aren’t up in the mix enough for me to really enjoy it.

While this album has some very nice moments – the arrangements are tight and the overall production is good; I like Ms. Ulseth’s voice a lot – it’s a bit uneven and didn’t really give me that certain excitement I hope for when I haven’t heard an artist’s work previously.  Also, the burying of vocals of some songs was a distraction, which is a shame as the musical performances are great and the balance isn’t there.

Dance Scandal At The Gymnasium is currently available