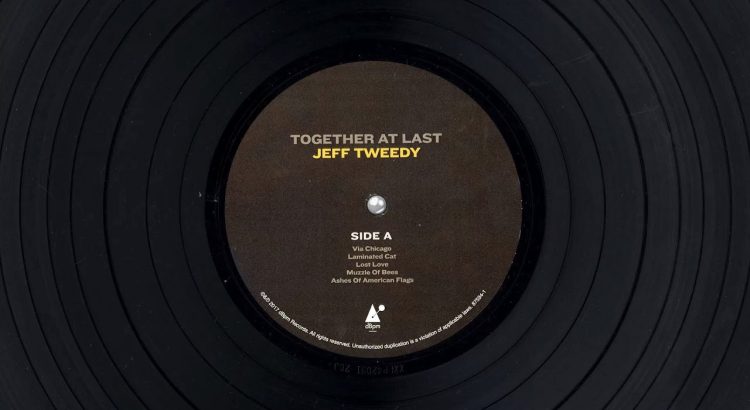 Wilco’s Jeff Tweedy has released an acoustic mini-masterpiece, an understated tour-de-force that quietly creeps up on you and never lets go. Tweedy’s new release Together at Last, recorded at the band’s Chicago studio The Loft, is a collection of previously released compositions, pared down for guitar and vocal.

The song selection has a few Wilco favorites along with a couple of “odds and sods,” from side projects Loose Fur and Golden Smog. Tweedy’s approach avoids those explosions of sound that are a Wilco trademark, in favor of simple, uncluttered, acoustic arrangements. It’s as if this album was purposely under-engineered.

The album opens with “Via Chicago,” Wilco’s murky masterpiece which features Tweedy on harmonica doing his best Neil Young. The song, originally recorded on the end of the century favorite Summerteeth, sets the trend for much of the release, with Tweedy singing just above a whisper.

“Laminated Cat,” better known as “Not for the Season,” is divine, with a flawless guitar solo that brings out the song’s essence. The lyric “Candy left over from Halloween/The unified theory of everything” remains a wonderful morsel of cereal box philosophy.

There’s nothing too fancy about “Muzzle of Bees,” originally recorded on A Ghost is Born and perhaps this writer’s favorite Wilco song. “In a Future Age” is similar, stripped down to basics, slowed just enough to stand out from the original recording. There’s overwhelming power in the simplicity of both songs.

The mellow mood lingers on 2002’s “Ashes of the American Flag,” notable for its irony. Tweedy enunciates like Dylan (“Diet Coca Cola”), as he fingerpicks his guitar singing “I wonder why we listen to poets/When nobody gives a fuck.”

“I am Trying to Break Your Heart” is another highlight, with its intimate lyrics and carefully strummed notes. The song is a regular at Wilco shows where the band is known to tear it up and then reconstruct it. Not quite the style of this recording – although Tweedy probably couldn’t help but add a little guitar overdub. It serves as a reminder that Wilco/Tweedy can be equally strong electric or acoustic.

There’s a degree of playfulness throughout the album, with its varied arrangements, key changes and fluid melodic structure. “Hummingbird,” a classic from A Ghost is Born, is a good example. It’s performed close to the original, but still sounds fresh. The tune is also a songwriting clinic:

“His goal in life was to be an echo/Riding alone, town after town, toll after toll/A fixed bayonet through the great southwest to forget her.”

The album is raw, naked and beautiful – Would it be too bold to say that, in a sense, Tweedy is making love to these familiar songs? There’s even beauty in “the space between,” those moments of silence where nothing is said or strummed. Indeed, even the sound of silence on this album makes an impression.