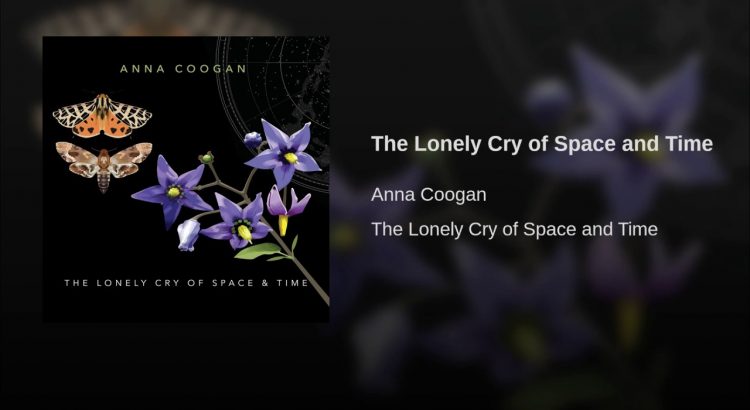 This third album from singer-songwriter Anna Coogan defies the notion that “rock opera” is a concept of the past, as The Lonely Cry Of Time & Space seems to have that kind of overall feel – a whole concept, rich with melody, a story and a vast, lyrical landscape.

The album, a virtual two-person effort which features Willie B. on drums and Moog bass, combines Coogan’s three-octave soprano vocals, electric guitar soundscapes and pointed social commentary into a fierce cohesive piece which combines the personal and the political, in a musical hybrid of rock, country, pop and classical opera into a unique whole. Her new direction was born from her series of performances in her adopted hometown of Ithaca, NY, in which Ms. Coogan and Mr. B created live musical accompaniments for vintage silent films.

The title track for the album – with its praise for scientific reason and rationality and its intimations of extraterrestrial life – was originally composed to accompany Soviet filmmaker Jakov Protazanov’s campy 1929 Aelita, Queen of Mars, which likened an alien invasion to the Russian Revolution. The inspiration was the discovery of gravitational waves by a group of researchers, with an actual audio sample included at the very end. “I’m optimistic whenever there’s a news story that doesn’t involve death and destruction,” says Anna, revealing that one of her relatives was part of the team that unearthed the sounds.

The ambiance of the title track has a slow, enveloping texture with the delay-laden opening verses that then kick in to a harder edge as the song progresses, then pulling back.  There’s something of an early ’80’s new-waveness about it; I can easily imagine hearing it on WSIA, our local college station, on a Friday night; “Collateral” has a sinister surf vibe and the way Ms. Coogan’s voice arcs works perfectly; “Meteor” is another new wave-styled piece, with its poppiness and groove (and is the highlight of this album, to me – immensely catchy) and “Follow Me” has a late-period R.E.M.-mourning feel (think Reveal or Around The Sun).  One of the most enjoyable aspects of this album is the production, especially with the sound of the guitars, which have a purity; a crispness about them that I absolutely love.

This isn’t an “easy” album to absorb on first listen; the complexity, the different styles of music can be disconcerting – not in a negative way – it simply throws you off, initially.  But after spending time with it and listening/re-listening, you then begin to take in the individual songs and find they have a staying power.  Which, to me, is something I think every musician strives for.  Certainly, I think Anna Coogan wants these songs to live with those who want to hear and know.

The Lonely Cry Of Time & Space is currently available